God is the God of the living and not of the dead. Many questions are on our minds: what will happen to me after my death? Why have children? Why get married? If I ever come back to life, will I be 15 or 50 years old? What will happen after death? Then it is possible to invent everything.

In Jesus's time, the Pharisees and Sadducees were always in conflict with Christ about the life to come; the Pharisees (the separated) were attached to the small details of the Law of Moses; they despised others; however, they believed in life after death.

As for the Sadducees, who take their name from Zadok, a High Priest in Solomon's time, they were a priestly caste, wealthy members of the tribe of priests and members of the Sanhedrin. They only recognized the first five books of the Bible ( Pentateuch). A political and religious group believed neither in the existence of the Angels nor in the resurrection of the dead. The Sadducees always found themselves at the side of the Pharisees trying to put Jesus to the test. Jesus called them a race of vipers and said to his disciples: "Beware of the leaven of the Pharisees and Sadducees, that is, their teaching, for they say the opposite of what they do. More than that, the Sadducees are among those who send Jesus to death and imprison his Apostles.

2- The Sadducees want to test Jesus

The Sadducees want to test Jesus to prove to him that the resurrection of the dead is not possible. They start from an impossibility: in their logic, a widow who had had several husbands on earth could not resurrect; otherwise, she would find herself with her seven husbands. they think that life after death is in the continuity of present life. It is the opportunity for Jesus to prove to them that there are a rupture and a change. Our condition of resurrection will be different. Some religions think that once the believer dies, he will find 25 virgins in heaven, no way, the sky is the time for cloudless maturity, the disease will no longer have any power over us, we will be able to work without getting tired. 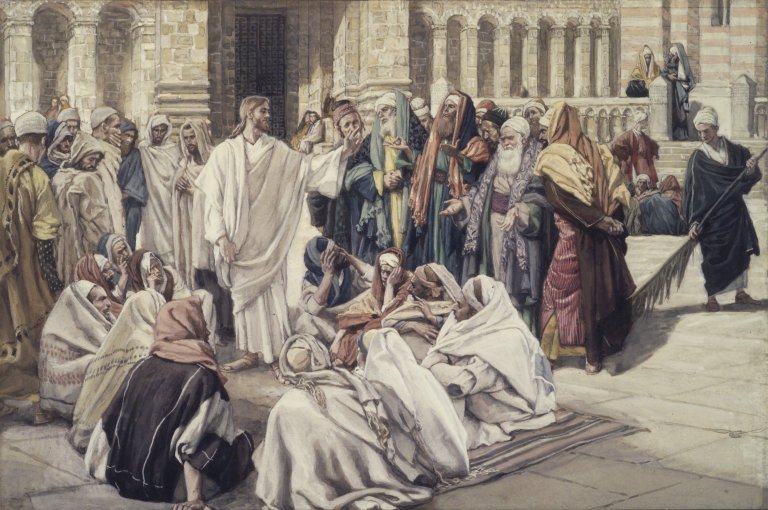 We will be like Angels and not Angels because the Angels have nobody. To be like Angels is to live in permanent communion with God, to praise Him unceasingly, and to admire His brightness and beauty. The sons of the resurrection do not marry. In the resurrection, we will find our bodies, and even the bonds we have forged in this world will be strengthened; we will live through God's love. Let us try from this world and through our baptism to grow in God's love by abandoning our egoisms, wars, the power search.

4- Jesus did not say that everything that existed here on earth will disappear.

A woman who had seven husbands will find them without anyone being harmed. We will love in the way of God, who loves us and keeps his covenant with each one of us without being shared and forgotten. Only one thing matters. God is the God of the living. It is God who makes me live now. Without him, my life would be nothing, and he did not create me to banish me from existence. Without him, my life would be meaningless. It is God who makes me live forever even after my death because he loves me and will always love me, so it would be useless to try to imagine what our life will be like after death. A fetus never asks itself what it will be after birth or how many husbands or wives it will have. Once born, would the child agree to return to his mother's womb? One thing is enough: God will always love us despite our slippages, despite our infidelities. If Abraham, Isaac, and Jacob, who have been dead for centuries, are loved by God, it is because they are alive forever. God is the God of the living and not of the deceased. Real death is that of God's refusal, the refusal of his love and perseverance in hatred, pride, and sin.

5- At death, we are not incarnated, but we are transfigured

After death, we are not incarnated by returning successively to the world as Buddhists say. In the end, we are not incarnated, but we are transfigured. God is the God of the living, and he predestined us for eternal life because we are his adopted sons, the sons of the resurrection. Our transfigured bodies will not be subject to the notion of time or space. Jesus rose from the dead everywhere. After death, we will be fully fulfilled as these Angels of Jacob's Dream who ascend and descend on the same ladder without touching each other. In heaven, our selfishness and quarrels will disappear. We are not made for a short life, do we? And do we believe that those who have gone before us are alive with God? How do we translate this time when a loved one dies? How can we make our customs about death more Christian? Our marriages, our loves from here below, are in the image of God who does not die. They cross end, and we will find them transformed on the other side. Lord, make me live your life today by despising the goods and considerations of this world, and I will also be with you forever in eternal life where there will be neither weeping nor gnashing of teeth but peace and joy around the God of the living.